How did you get involved with Theatre 121?

I’ve been a member of the Woodstock theatre community since 2014! My very first show was The Wedding Singer with TownSquare Players. In 2015 I joined the board of directors as a director-at-large, and then transitioned to the Secretary position in December of 2015. My husband and I were involved with multiple shows, either performing or in a staff positions, until 2018 when our little boy was born.

Why did you want to direct Matilda?

To start, I’ve always wanted to direct. It’s been a dream of mine since I was a little kid. Matilda is one of my absolute favorite stories. I remember the first time I watched the Mara Wilson/Danny DeVito movie. I was seven years old and I was in love with the story of this little bookworm who took matters into her own hands, saved her school, and lived happily ever after with the teacher every 90s kid wished they had- Miss Honey. It made me want to get my first library card (a day I’ll never forget). The book quickly became my favorite Roald Dahl story. As I got older, I started to understand the story on a much deeper level- it’s a story of a neglected child who has no one to help her, so she helps herself. When she discovers the power to change her own world, she advocates for those around her and changes their world as well. This is an important message that the world needs right now (I could write an essay on this, but I won’t. You’re welcome).  I’ve been dreaming of directing this show for a few years now. When I saw Theatre 121 was doing it, I realized it was time to finally take a leap of faith and put my ideas out there. Now I’m here, at rehearsals, watching some amazing people bring this vision to life. It’s humbling to say the least. 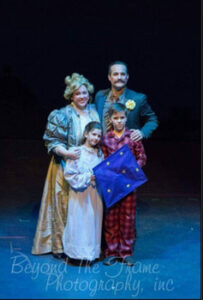 What made you fall in love with theatre?

My aunt Tracie introduced me to musicals when I was a toddler. I spent a large part of my childhood watching classic movie musicals on VHS with her. Seeing the Pontipee Brothers shake up a barn dance or the Von Trapp kids introducing themselves to Maria still makes me giddy. I had always taken dance lessons, but in 1997 I had an opportunity to be in my very first musical: School House Rock Live! Jr. I was a noun and I got to shout, “A HOUSE!” during the Noun song, so I guess you could say I was a pretty big deal. 😉 I was hooked. Theatre is the reason for so many amazing things in my life- my best friends, my husband (we met in a production of Hairspray), my son. It’s one of the most important things in my world. 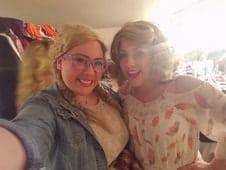 The people. When you walk into auditions, to rehearsals, to events, to shows- You’re guaranteed to see someone you love and who loves you back. We’re there for each other on and off the stage. I’ve gone through some of the best moments of my life with them. They’ve been to my wedding, to my baby shower, to my son’s first birthday party. They also all were there for Tony and I during the absolute worst moments of our life when our son had his open heart surgery. We were blessed with over 100 bonus family members praying for Hudson, encouraging us, praying for us, checking in on us, and sending us their love while we went through that ordeal. Hudson has so many honorary aunts and uncles I can’t keep track. When I say Theatre 121 is my family, I mean it.

What do you do outside of theatre?

Umm… Dishes, laundry, making dinner, keeping my toddler out of trouble. I’m a stay at home mom, so Hudson is basically my entire world. When he’s napping, I enjoy watching geeky things (Doctor Who, Marvel, DC, Star Wars, etc.) with my husband; and playing The Sims.

What is a fun fact that not many people know about you?

I speak ubbi dubbi fluently. It’s a secret language from 1970’s show Zoom (they brought it back in the 90s for a while).

Matilda the Musical will be playing at the Woodstock Opera House March 6th-22nd.

What Is a Cabaret?

Living in Revolting Times: A Kid’s Perspective of COVID-19

Meet The Board of Directors: Aaron Gomez [Secretary]

Meet the Board of Directors: Jenn Kalchik