How did you get involved with Theatre 121?

My first experience with the Woodstock Opera House was back in high school when I earned entrance into a program called the Woodstock Musical Theatre Festival,where a group of high school students from around the county were given professional acting lessons and professional backstage experience by working with the acting companies that used to tour and perform on the Opera House stage. In the years that followed, I found myself coming back to the Opera House again and again. My first lead role was in TSPs production of “The Boyfriend.” I’ve gone on to work with both WMTC and TSP in a variety of productions and from there, I was inspired to start my own theatre company: Riverview. Following my time with Riverview, I then went on to work as the director of the West Campus drama program at McHenry High School. I’ve had the extreme good fortune to work with many wonderful actors of all ages and collaborate with extremely talented folks all over Northern Illinois and the Chicago area. 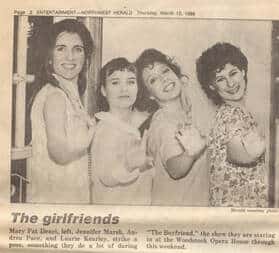 What made you fall in love with theatre?

Definitely from my parents – although I don’t think they knew they were inspiring me to move in this direction. Both my parents were always singing in the car, around the house. My Dad would tell jokes and at family parties, he would have all the cousins put on “shows” to entertain the adults. They had a very eclectic record collection and I would sit for hours listening to not only their jazz albums, but also their Broadway soundtracks like West Side Story, Fiddler on the Roof, and South Pacific. My first time on stage was in a little play in Jr High. I got the lead (I couldn’t even tell you the name of the play) and we have pictures of me on stage in the school gym. My mother helped me with my costume and provided some of the props. My parents would also go into the city to see shows and they would bring me back the programs. I remember once them handing me a full-color souvenir program from a production of Camelot starring Richard Burton! As young as I was, I knew that was something special.

I love the freshness of Theatre 121. They have a great new vision that’s waking up our theatre community. I’m a sucker for a good marketing campaign, so I especially love, conceptually, the overall slick look of the new company and the continuity of their inaugural season package. Theatre 121 invites you in and makes you want to be a part of what’s going on – whether that means buying a ticket, auditioning for a show, or being part of the production team. I also like how they partner with the community on local events. They welcome collaboration and the sharing of new ideas. And they continue to influence and build through their mentorship programs. It’s been a real treat to watch the realization of a new era of community theatre in Woodstock through the birth of Theatre 121.

What do you do outside of theatre?

My full-time, bread-and-butter job is as an administrative assistant to the assistant superintendent at McHenry High School District 156. I live in Woodstock and I am enjoying my time as an empty-nester by singing whenever and wherever I can, doing theatre whenever I can, hanging out with friends and family, planning more trips around the globe and spending time with my husband John and our newest member of the family, our rescue dog, Nigel! 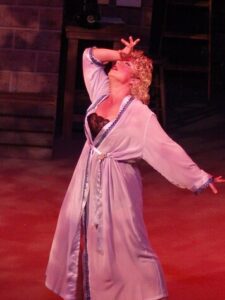 What advice would you give to someone who was auditioning for Murder on the Orient Express?

“You are perfectly cast in your life. I can’t imagine anyone but you in the role.” ~ Lin-Manual Miranda

I always tell people, an audition is another chance to perform. Go on as many auditions as possible because we, as performers, THRIVE on getting up on stage and doing our thang. But so often, people let their nerves get the best of them before an audition, like this one audition is make-or-break, or the end-all-be-all of everything. It’s not. It’s you being you and showing us YOUR goods. If you’re a right fit for this one show, this one time, cool. If not, keep on plugging away and working on your craft. But revel in the fact that you’re in a room, with a rapt audience who wants nothing more than to see you shine!

Tom Hanks recently quoted a former director he once had on his first professional job who said (the actor’s job was to) “…show up on time, know the text, and have a head full of ideas.” Spencer Tracy also is famous for saying, “Know your lines and don’t bump into the furniture.” For those auditioning for MURDER ON THE ORIENT EXPRESS I would also ask the same thing: PRACTICE. Know your stuff. Do your work and come prepared. Be on time and be ready to have fun and try new things.

Best of luck to all! We can’t wait to see what you bring into the room!

What Is a Cabaret?

Living in Revolting Times: A Kid’s Perspective of COVID-19

Meet The Board of Directors: Aaron Gomez [Secretary]

Meet the Board of Directors: Jenn Kalchik